This project is novel in its ambition to explore the potential of representation-centric platforms and empathy inducement to improve the intellectual humility of dialogue in online news commentary. The field experiment will recruit ordinary citizens who usually read online news and randomly assign them to experience different online news environments.

The representation-centric platforms, Deliberatorium and Pol.is, have been chosen because early pilots suggest their potential to cultivate intellectually humble dialogue, and they are designed to promote different forms of discussion. Deliberatorium is more restrictive in its requirements of relatively dispassionate reason-giving; Pol.is more open to a broader range of dialogue types and potentially a more emotional understanding of the perspective of others.

The experiment will investigate the role of empathy by randomly assigning half of the groups to receive perspective-taking instructions aimed at inducing participants to be more open to people and ideas with which they disagree.

The project will also field-test a set of measures for investigating intellectual humility in online environments.

We thus test the ability of the online platform (environment), a psychological intervention (individual instructions), and the interaction of the two, to promote intellectual humility.

One of the key components of our experiment is to investigate whether inducing empathy can encourage people to engage in dialogue that is more respectful and intellectually humble.

We are going to randomly assign half of the groups to receive perspective-taking instructions designed to encourage participants to be more open to people and ideas they disagree with. Within the commenting platforms, we will incorporate clear and consistent reminders that participants should imagine what their fellow citizens are feeling as they participate in the online exchange.

We have chosen to this approach for two main reasons.

First, good research demonstrates that inducing empathy through perspective-taking instructions can lead to less bias, better evaluations of others who are different, increases in helping others, less prejudice, and reductions in everyday bad behaviors. These findings suggest that empathy can play an important role in encouraging intellectually humble public discourse.

Second, these kinds of instructions are easy to adapt for an online commenting environment, which should make them attractive to news organizations.

In February 2017, the Scholio project was awarded funding as part of a new $2 million fellowship grant program sponsored by the University of Connecticut’s Humanities Institute and funded by the John Templeton Foundation. Scholio is one of 10 innovative projects that were selected to explore the broken landscape of American discourse and create enduring strategies to spur and sustain open-minded, reasonable and well-informed debate and dialogue.

The 10 interdisciplinary research projects focus on balancing two key features of democracy: intellectual humility and conviction of belief. Carefully curated out of an applicant pool of 110, not only for their individual merits, but also because they work in complementary fashion, each project will investigate how networks and institutions meant to connect us may be pushing people apart.

“Arrogance is easy in politics; humility is hard. These projects aim to rekindle the sense that we can learn from each other, and thus to help us restore a more meaningful public discourse,”

says Michael P. Lynch, director of the Humanities Institute and Principal Investigator of the Humility and Conviction in Public Life project.

More information about the funded projects can be found here
http://humilityandconviction.uconn.edu/2017/02/08/10-projects-1-audacious-goal-find-solutions-to-help-cultivate-healthier-debate-and-dialogue-in-america/

CENTRE FOR THE STUDY OF DEMOCRACY – FUNDED RESEARCH

The public sphere around media outlets offers many examples of dysfunctional behaviours that undermine the quality of public discourse. This is particularly the case with online public comments sections on news sites that attract thousands of people every day.

Can re-designing comments platforms promote more reason-based, intellectually humble dialogue? This is the question the Scholio project aims to explore, through a large-scale field experiment.

The field experiment will recruit ordinary citizens who read online news and randomly assign them to experience different perspective-taking instructions and platforms that organise and visualise comments in different ways. The project will also field-test a set of measures for investigating intellectual humility in online environments.

The aim of the Scholio project is to develop a scalable model for how news media institutions, and others, can incorporate comment platforms that promote reason-based, intellectually humble dialogue.

Scholio is one of 10 projects funded by the John Templeton Foundation within the broader Humility and Conviction in Public Life programme at the University of Connecticut.

Today we had a skype conference call among the co-PIs and we decided that our experimental environment will be similar to the Monkey Cage. We selected the Monkey Cage because it is a medium size blog within the Wahington Post and is the perfect target for the level of engagement we can achieve with our current funding. We hope to engage somewhere between 5 to 10,000 people in our experiment. To create experimental group we will divide our community into 12 groups, so we will have less than a 1,000 people commenting on news in each group during the experiment. The Monkey Cage has a simple layout and has enough space at the bottom of each article to place our treatments. The next issue we need to decide is the topics for our experiment.

Please do not hesitate to email us!

The second technology we will use in our experiment is Pol.is. Pol.is takes a very different approach to the Deliberatorium, aiming to work with emotions. The Pol.is interface is extremely simple. A user can vote (agree/disagree/don’t care) on the comments of other users presented in a random order, or can add her own comment. All the votes are then displayed on a map and clustered displaying users that agree on a set of issues. The objective of this platform is to draw a “climate report” of all the points of views among the users. It shows the existing coalitions of agreement among users and the fact that these coalitions are more fluid than people might think. This is an online version of an exercise often used in face- to- face deliberation, with a clever use of a simple user interface. In the face- to face- world participants voice their ideas or concerns and move around to cluster with those issues that resonate with them. It is an extremely useful exercise for group building and to show that we might disagree on some topics, but we often agree on others. We spoke with Colin who is the CEO of Pol.is and he is enthusiastic about the experiment and is going to help us make sure that our treatment is the best reflection of their philosophy as possible. He also hopes to test crowd-moderation via our experiment. We are not sure we will be able to do that, but we will see! 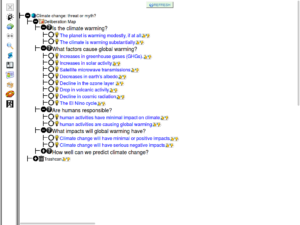 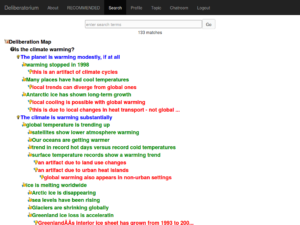 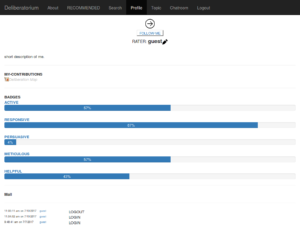 Welcome to our development diary. As you know from our previous post, we received funding to test new ways of improve the comment section of online news. In this space, we will track what we are doing and how the project is developing. Our plan is to test the platforms from September until the end of the year in Europe and the US. Later in 2018 we will engage a global online community of citizens in the main experimental phase. This diary will provide updates on what’s happening!

Add Comment by Rico Reinhold from the Noun Project

Test tubes by To Uyen from the Noun Project 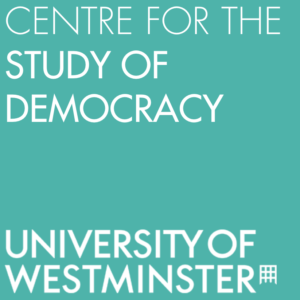